This is it - Weather the storm

"Two Zen monks in robes and shaved heads, one young, one old, sitting side by side cross-legged on the floor. The younger one is looking somewhat quizzically at the older one, who is turned toward him and saying "Nothing happens next. This is it."
(from The New Yorker)

I'm always waiting for what is next instead of focusing on what is now.

There are people at this very moment (and you may be one of them) concerned, worried, scared in terms of Hurricane Irene and the damage, destruction and death she will bring.

I would worry for my family and for all of those I love. I would also have compassion and concern for elderly people living alone in their homes without anyone to come and help them. Can you imagine being 80+yrs old and you really never leave your house/apartment unless it is for a medical appointment and you are suddenly alone in the dark unable to manage a safer situation - knowing that no one even realizes you are there?

What about those suffering from mental illness who are living perhaps in a basement apartment with their only friend in life - a dog - who serves as their only contact, their only source of warmth, affection and loyalty? They haven't been able to work for years because they are hearing voices or they are crippled by depression. They live in poverty and they have to fight the demons in their minds day in , day out. Their family and friends have given up on them because they have chosen fear over awareness, compassion and support. Where are these people going? How do they re-locate?

Nature's destruction is nothing new, it's always there lurking in the background and when it makes its way to the forefront it has no mercy. It will happen again and again in ones lifetime, we will all face some terrible storm and its aftermath.

We will be lifted off our feet and spun around in the air before our crash landing. When the sky breaks and the sun returns, we just have to hope that someone is there to reach out and put us back on our feet and re-assure us that "this is it."

Wishing everyone a safe lock down surrounded by people you love and the thoughtfulness of including those who are less fortunate but just as deserving.

Posted by Lisa Audrey Cohen at 2:25 PM No comments:

Gummies are part of my daily fruit intake

I was reading this seamlessly irrelevent fashion magazine - irrelevant because my idea of fashion = button fly torn Levis, $5 t-shirt from Giant Tiger and sneakers. My idea of doing my hair = water, gel, fingers in fork formation once upward = spikes in all the wrong places. My idea of make-up = Johnson's Baby Lotion (with Lavendar) gently massaged into the pores of my face in a smooth swoosh (swwwwooooshhh - that's how it sounds).

Anyway some guy who produces or directs or does something with movies was quoted as saying, "Instead of giving me one reason why my idea won't work, let me give your 10 reasons why it will work" I probably misquoted him but hey this is my post so I can do what I want.

I often have unusal ideas. I discuss them with myself and usually act upon them.

Here are a few:

Gummies are part of your Daily Fruit Intake:
Substitute my daily serving of fruit with gummies, freezies (those funky coloured frozen sticks that you suck out of a plastic tube), Juicy Fruit gum ( no brainer, it's got "fruit" in its name)

Problem with Idea:
According to my nutritionist (who clearly I do not see often enough)these are not part of the daily serving of fruit as per Canada's Guidelines (yeah well Canada eats lots of Bacon and drinks lots of beer and let's not forget Eastern Canada - to be exact Quebec - where vegetable servings are considered Poutines with curds and peas).

I'm Trying to Shop for Groceries - Get Out of My Way
Instead of having those boys in the grocery store stock the shelves and push those giant carts up and down the aisles while we try to shop during peak hours - have them do this before or after store hours (I know - genius).

I'm On - Hold - Not Dying - Please Turn Off That Awful Music
Instead of playing awful, depressing music while clients are put on hold for 30 minutes by Bell or Rogers and all of the "communication" companies, why not play some of the best comedians doing their routines? Everyone on hold will still be angry and frustrated but at least they will be laughing.

Well why don't they just have you place your order when you get to the window and you have already read the outside menu and you know what you want and get this... you can talk face to face, ear to ear with an actual person who will not only understand you but get your order right.

Oh and by the way you end up waiting at the window anyway because they have to grab your food, bag it, add the ketchup you always have to ask for after they have handed you your stuff and usually since most of the staff did not come in because they were hung over or they are student activists rioting in a city near you so the person with the headphones (who by the way will no longer require the headphones if it is done my way) is not only serving the drive thru but the main counter as well.

So tell me - what IDEAS do you have? Because let's face it, as consumers we know what we want and we often leave stores, or get off phone calls and are frustrated and ready to call the press but we don't because we have so many other things on our minds - we just let it go.

I'll stop now because this post is way too long and well I don't want to have to put you on hold.
Posted by Lisa Audrey Cohen at 9:38 PM No comments:

It was 1AM, I couldn't sleep and neither could my dog Bam Bam so I grabbed a headlight and we snuck out without awaking my other canine or my husband. We headed down a wooded path in the light of a half moon. We were surrounded by giant pines and the sound of crickets and bull frogs chatting by a pond.

We headed up a small hill and sat on a large rock and looked up at the sky. In the country, you can see all the stars. Whenever I look up at the sky I think of my dogs who passed away almost a year ago. I lost both of them within a month of one another. They were my boys and I loved them very much. While Buddy was older his stroke and passing the next day did not come as a total surprise however my Buster was only 4 and his terminal cancer diagnosis came as a terrible, horrific force that I wrestled with all my might but in the end I lost that battle as did Buster. 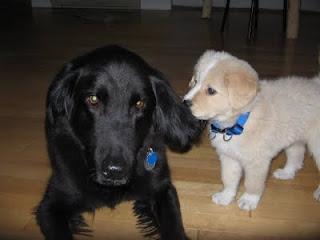 Deep in the sky silouettes of warm white clouds float like giant snowflakes and every now and then a star suddenly falls and I want it to swoop me up and bring me to that beautiful place where stars learn to twinkle. I want to go there because I believe that if I could catch a ride with a twinkling star, I could find Buddy and Buster and kiss them one last time. I could see them happy and healthy and eternally young.

Bam Bam and I spent a good hour on that rock in the woods. We hung out with the crickets and the bull frogs and all the other animals that roam the forest at night in search of prey and adventure.

As we headed back down the road a strobe of light danced across the sky. It resembled the colors of a rainbow after a storm and it seemed to call out to me as if the entire sky was only there for my eyes at that very moment. I just stood there watching the colors radiate and flow and then they were gone.

Bam and I slept on the couch under a big cozy duvet. I dreamt that a star came to take me for a ride and stopped off at the twinkle station and just as we were about to head up to the very top of the sky, I saw Buddy and Buster - they were too distant to touch but they both looked at me and smiled - they told me they loved and missed me and they looked happy and well. They were together like brothers just as they had been in life.

I woke up the next morning and they were gone. Then I realized they had been gone for quite some time and of course I knew they were never coming back. So I decided I would have that same dream more often so I could see them as often as possible.

But we can't control or pre-select our dreams. If I could I would dive so deeply into one that I would never have to make my way back to reality.

Sleep well my boys and when I look up at the sky, remember to twinkle.

Posted by Lisa Audrey Cohen at 11:19 PM No comments:

Lisa Audrey Cohen
Writing about Life, Love, Loss and all that happens to you and me in-between. Content/Blog/Ghost Memoir/Web/Bio/Speech...
Newer Posts Home
Subscribe to: Posts (Atom)