Valentines Day - Give me a Break


I'm not sure if you have seen this Valentines Day commercial yet - perhaps you are fortunate and it is not playing in your area.

This guy runs to a train station with a box of chocolates in hand and he grabs this woman (whom supposedly he knows in a romantic sort of way) and lifts her in the air and kisses and hugs her just before she boards her train.

Then he gestures to her and his lips read (and the music plays) "Merci" (that means Thank You in French).

Then she opens the box and finds these mini chocolate bars like I use to get in my Halloween bag. She is very, very happy to be on the receiving end of these chocolates (and that the train has pulled away from the guy at the station).

That's the thing about Valentines Day - it's expected - it's on purpose - it's cruel for anyone who is single and the worst part is that it use to (I hope this tradition has stopped) begin in grade school when our teachers announced one week ahead that we would be doing an arts and crafts project that involved our little hands and fingers making Valentines Cards and giving them out to our classmates.

I mean seriously - these things had kisses on them and hearts and shapes and I was 5 yrs old. And to make it worse - some kids received more Valentine Cards than others - how was that possible? How was that acceptable?

It's tough being single when you don't want to be single. I know - I was there for around 10 more years than all of my friends. I mean I was a Bridesmaid in every colour (the worst being Burgundy Sequence). 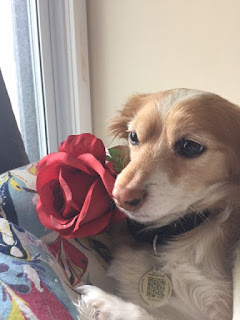 And by the way, if you really love someone, don't you celebrate that love every day? Even if they do all sorts of things that annoy you and they pretend to be listening to you while playing Brick Breaker on their phone.

That's the stuff that love is made of - all of the idiosyncracies that we share along the way. All of the things that we accept, forgive and forget.

There's no need for a box of chocolates or flowers to say "I Love You" on a single day in February. It's the friendship and the belief in one another and the ability to see the good even when there is some bad. It's the patience, perseverance and absolute "I've got your back" that nurtures and supports our relationships and it's hard work!

I'll tell you what is better than flowers and chocolates and being 5 yrs old and having a cramp in your hand because your teacher made you write 30 Valentines Day Cards to your classmates and you have no idea why - it's "a big warm hug".

Moral of the story:

Forget the chocolates, forget the cards, forget the flowers and just remember to say "I Love You' as often as possible because those 3 words will be remembered for much longer than one day a year in February.