I just want to start by saying that this post makes no sense whatsoever. Firstly I have never met Anthony Bourdain, although I have read his books, am a big fan and love No Reservations.

Secondly because I can't cook and although he can, chances are he will not ever make me breakfast. 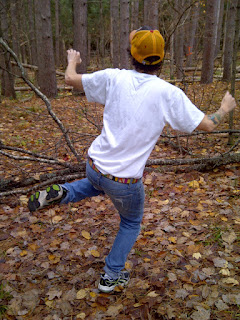 Now if I was given a choice of two famous people I could hang out with and chat, Anthony Bourdain would be one of them. We'd eat, he'd drink (I don't) and the sarcasm would hit an all time high the more he drank and the more I did not drink.

Anthony Bourdain is a worn tire. I mean that in the most wonderful way. If you read Kitchen Confidential and/or if you've ever worked in a kitchen (not yours), you know that it's a whole other culture, one often swimming in drugs and alcohol and "adding" things to the dishes of those customers who complain or are rude or who you simply decide you don't like. The kitchen is hot, busy, tight and the shifts are long and hard.

How do I know this for fact? Is it because I slaved away in many restaurant kitchens as a short order cook being yelled out as my upper body became drenched in sweat and I went home smelling like the onions I cut for 6 hours straight?

Getting back to hanging out with Anthony. So I'd rather hang out with someone who has been addicted to something at some time and knows what it is like to hit rock bottom and lose all dignity and become humiliated and have to get themselves back up on their feet and reinvent themselves and pick up from where they didn't start from and lived so rough and raw that the lines on their face and the glossy finish in their eyes is witness to it all. Someone who has suffered at the mercy of others and at the mercy of themselves. Someone who had this great person in their life at the wrong time even though it should have been the right time but they screwed it up so much that it became the wrong time and they were never able to make it right again.

Someone who said many times "this is the last time" but they still haven't had that last time.

Leonard Cohen is another famous person I would love to chat with in Murray Hill Park in Westmount, in Montreal, in Canada where he grew up and where I was born and raised.

We have the same name, well almost, "L. Cohen" and when I was doing my BA in Creative Writing way back in the 80s or was it the 90s and do I even remember the difference between the two eras? I took a poetry class and was challenged by my prof who liked my R rated poetry to write a love poem to someone I would really like to be intimate with and so I wrote for and to Leonard. I actually found out where he lived in Montreal (a second or third residence that he still owns) from a local writer who had interviewed him for a story (and who I followed around at a party and refused to stop following until he gave the address) and I placed the poem in an envelope in his mail box.

A month or so later, a letter arrived in the mail on "Stranger Music" stationary - Leonard's Record Label/Publisher/Management that ran away with his savings and inside there was a letter signed by Leonard that read:

"Dear L. Cohen, Thanks for the poem, Sincerely, L.Cohen" and then signed Leonard (because that's his name).

I had written the poem and signed off the same "Sincerely L. Cohen" not only because as I already noted, we had the same name but because it was a reference to his song/poem "Famous Blue Raincoat".

I still have the poem and his letter framed and I have seen him several times in concert but have never sat at the top of Murray Hill Park overlooking our fine city of bagels, smoked meat (pre Celine Dion), multi-cultural, multilingual, student striking city of Montreal side by side with Leonard.

And quite frankly, I think it's a shame because if Leonard knew that he had an open invitation to sit with another Cohen in the park around the block from his childhood home in his childhood city, I think he would be all over it.

Anthony would also love it here. He did cover Quebec in one of the series of "No Reservations". He did the foie gras thing that upsets most people as much as the ducks although he did a repeat of part of the show interviewing a Vet and a foie gras farmer/person to explain that the ducks don't have a gag reflex like people so it really isn't cruel or painful to place those really long feeding tubes down their throats and over stuff them so someone can order foie gras and put it on a cracker. Yeah that part of the whole Bourdain thing, I'm not so thrilled with but as I noted, he is damaged.

I don't think Leonard would do that to a duck afterall he went to live with monks while all of his money was embezzled and he meditated and cleaned floors with brushes and he later turned into a non-smoking vegan (are there smoking vegans? - that's actually a great name for a band) and went on tour and passed out on stage but earned back all of his money and more. No I don't think Leonard would bother a duck.

I have to finish this post because it's just too much brilliance for me and for you all at once and also because I am hungry for some French Toast with fresh berries and Quebecois Maple Syrup and I wish Anthony would come over and make me breakfast but there is about as much of a chance of that happening as me stuffing a feeding tube down a duck.

The best thing would be if Anthony cooked and Leonard and I enjoyed it along with some really strong espresso while we plunked ourselves on a big cozy bean bag thing and wrote  poetry together. 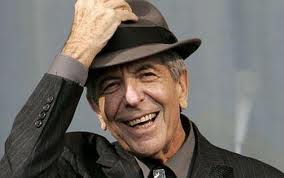 Although the reality is that I am going to stay in my PJs and burn some toast and drink some black coffee and write a post about Leonard Cohen and Anthony Bourdain that really makes no sense whatsoever. But that's okay because hey, I'm damaged.

Posted by Lisa Audrey Cohen at 5:01 PM No comments: