Sex on a Sunday


What is Sunday really for ?

A day to stay in your  sweat pants on the couch streaming a show about a chemistry teacher in the desert in his underwear?

A day to take the kids to karate, ice skating, basket weaving and someone else’s house (now you’re getting the idea)?

A day to go to the $ store for something you really don’t need and that really doesn't cost a $ ?

Well - how about sex on a Sunday?

As a matter of fact (completely fictitious but read on), on a recent Sunday I decided I was going to explore the Atwater Market right here in our great city of Montreal (for those of my readers from around the world - the Atwater Market is an outdoor/indoor market where vendors sell fresh produce).

Once I arrived there I really had no idea what to shop for or how to “work” the market so I headed over to the nut aisle  and found a barrel filled with almonds. Now according to Dr Oz who should really be performing heart surgery and saving lives because he is a heart surgeon but instead has a TV show because him and Oprah hit it off a while back when she realized Dr Phil (who should just do the TV show and skip the practice) was heading downhill and even his wife no longer wanted to have to stay and watch the whole show just to hold his hand at the end, pretend to being saying something to him and exit stage left).

Yeah so Dr Oz told me to eat more almonds because they are good for me or better for me than the bag of chips I eat for lunch and the frozen pizza I eat for dinner (and now you know why I should visit the fresh produce market more often).

I bent down stuck my head in the barrel with one of those scoopers in my hand and just as I was coming up for air someone else’s head collided with mine.

I placed one hand on my head - which really does nothing and the other over my eye - which really made no sense because I did not get hit in the eye. With my left eye still open I saw right there in front of me a particularly sexy man with that shadow - "I barely shaved but shaped it" trendy look - ash brown hair - green eyes that were sort of baby blue like a husky wolf mix - a full tattoo sleeve running up his right arm - in various shades of green and clay illustrating trees in the forest and little birds flying around and a running blue stream - his hair was that awesome length where it falls just at the mid ear and so he has to sweep it back ever so perfectly to keep it from covering his eyes  - a chin so square and chiseled with a slight dimple that I immediately wanted to nibble it.

He apologized for the slight accident, asked if I was okay and then we continued down the nut aisle together without any almonds (sorry Dr Oz). We got into the kind of conversation you have when you first meet someone - what you do for a living - that you like dogs and your favourite fruit is a vegetable - and you have 12 siblings and 6 of them are named Hutch and your aunt’s name is Starsky but she looks like Tom Petty (not that there is anything wrong with that) and then he said to me..

“Do you want to explore the market together and get something and have a picnic by the water?”

So we picked up a baguette (for my readers from anywhere in the world who do not know what a baguette is - that is ok - it is bread - a stick of bread - crusty on the outside and warm and chewy on the inside and if you slap some cheese in there - you are set) and a few interesting cheeses from various regions of Quebec (that is a province not a country - think that one over), some grapes (purple in case you are wondering) and a small bottle of wine. Oh yes and some dark chocolate for later.

There we were on a beautiful Sunday at the market enjoying a picnic and talking about how both of our grandmothers loved to knit mint green sweaters (spectacular) - when suddenly he "tongue fed" me a grape - that's right folks - he moved toward me with a grape delivery disguised as a tongue kiss and then before I could chew or swallow he tongued it back.

Then he chewed and swallowed the grape and came toward me again - fruit free - and licked my ear lobe - much like a dog would do.

Now keep in mind this man is delicious - perhaps a bit off - but I haven’t seen anything this beautiful in a long time.

So naturally not knowing if he is a psychotic serial killer - I say “Sure - I’d love to go to your place.”

He ends up living maybe 4 minutes from the market in a loft that over looks the canal. Upon entering his home the first thing I do as I always do when entering someone's abode for the first time - I take a deep inhale to smell his smell because we all have a smell and some are better than others and if that smell is not a smell I like - I have to exit to the right with Dr Phil - however this smell is nice - sort of like wood carvings - oh wait - there are wood carvings everywhere.

What are these wood cravings of you ask? Well they are of tongues in different shapes and forms jetting in and out of holes or parts of the body to be more exact.

And at that moment I realized that perhaps the psychotic serial killer scenario should have been considered more seriously.

But turns out those sculptures sell for 6 figures and he is actually famous.

Just as I am taking it all in, he leans over and kisses me - just brushing my lips with his - the tongue absent for the time being.

We end up undressing one another - which is much more exciting than just tearing off your own clothes and tripping over your underwear or even worse having them attached to your ankle the entire time you are having sex.

His tongue, his hands, his ripped stomach and incredible chest - more tattoos across his body - everywhere - anywhere - his movements - his taste - his hugs - his kisses - and again and again his tongue - yes - yes - I am loving Sunday afternoon.

Finally we came up for air and had some wine with a blanket wrapped around the two of us - talking, laughing, singing (ok we didn't  sing) and then it was time to go.

Moral of the story - Try to do something different on Sunday instead of making it a sleepy boring day. Go somewhere you rarely have been if at all and explore everything you find by looking, tasting, listening and following your gut. A word of caution though - if you are going to stick your head in a barrel of nuts, chances are you will find one.

PS - Mrs Dr Phil - I strongly suggest you visit the market instead of walking off stage with your husband - you deserve a day to yourself and if it’s cold - you can borrow my grandmother's mint green sweater.

No almonds were harmed during the writing of this story. 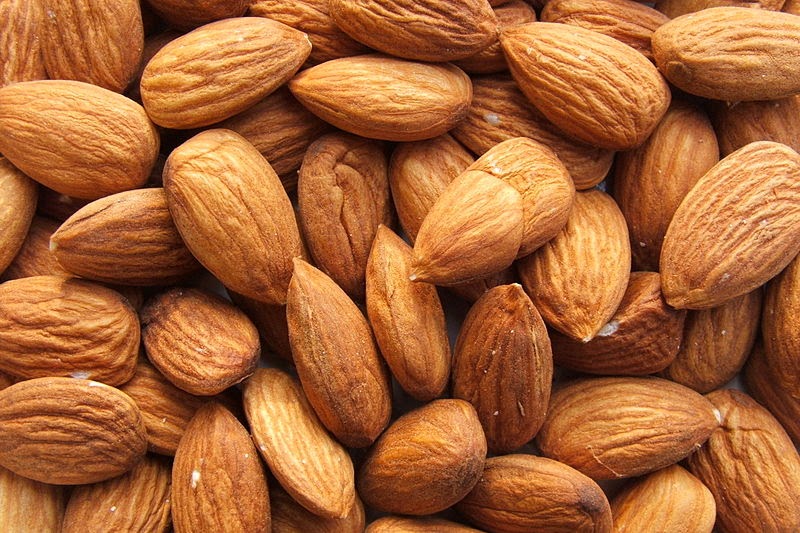