Ethan Hawke - Pass me a cigarette will ya?

An actor who has played the same part over and over again and I don't think he has washed his hair once. He also smokes throughout all of his movies and although he is evidently not clean, the women love him and you know what? So do I.

He's a bad boy. We like bad boys (we is you and me so just nod). When I was studying creative writing and literature at Concordia University in Montreal (where I learned about run along sentences and commas or was that semi-colons or were those semi-colons...I don't know because I never listened and here comes a dash) - there was this guy in my class. His name was well I can't really say his name so I will call him Tray (cause I always wanted to date a guy named Tray). Yes so Tray use to sit at the back of the class with me while our classic literature teacher read Chaucer (very confusing trust me). Trace would roll his cigarettes one by one, licking them closed with his tongue.

The first time we spoke, class had ended and I was making my way out of the building to use the bathroom in another building which took me 5 minutes, 40 seconds to get to (don't tell me you haven't found a special bathroom at work or school that has been mostly undiscovered by the majority of the population). Tray tapped me on the shoulder and gestured with a freshly rolled cigarette. I informed that I didn't smoke and then I looked at him more closely and noticed his long shiny brown hair back in a pony tail and his steal blue eyes and his dimples and his... anyway he was very attractive so I accepted the offer and we ended up not only spending the break together (in my special bathroom) but the entire semester.

I knew it wouldn't last because he was a bad boy.

Now back to Ethan. So Ethan needs a good sponge bath and he definitely needs to rinse with mouthwash and brush his teeth. I watched most of his movies - Bronx's Best - Reality Bites - Emperor's Club - That other movie where he meets that girl in Paris and spends days with her (smoking of course) - and yes well let's get to the smoking - the truth is - Ethan Hawke has driven me to cigarettes. 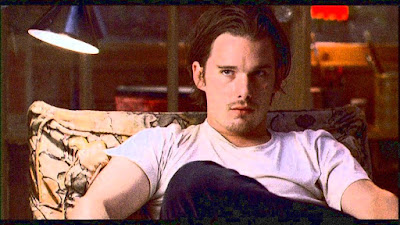 I am about as healthy  as it gets but I bought these herbal cigarettes today from this downtown tobacco store that has everything imaginable that you can smoke or put in your mouth and pretend to smoke. These are tobacco free, nicotine free and quite frankly I think I could have rolled some parsley, rosemary and thyme (thank you Paul Simon) and made one myself.

As I sit here and wish I had enough hair for a pony tail or at least for it to fall over my eyes and my face like Ethan's does - I feel the strong urge to smoke one and lay my head into my hands and pretend I am Ethan Hawke - the romantic - the poet - the philosopher - the musician.

Hey, I'm tattooed, I wear torn jeans, I spike my hair - how far off can I be from being a bad boy - ooops I mean a bad girl of course.

Now Ethan, he is busy making more movies, more money, more women and Tray, I met him several years ago selling poetry on the street. He was still as handsome and as had a rolled cigarette behind his right ear where I would store a pencil.We had a coffee, his eyes were incredible, his smile even more so but I knew deep down inside that we he was going to be a bad boy forever - him and Ethan (and also I knew deep down, that he really, really needed a shower).

I'm going to head out onto the balcony now and smoke me a herbal cigarette. Me and Hemingway and Thoreau and Emerson and Tray. We are all just living the life of a writer, one smoke at a time.

And far away, in a sleazy bar, by a fuzzy TV screen sits Ethan. He thinks of me as he eats stale nuts from the basket and he laughs to himself.

Shhh... If you listen carefully you can hear him reciting the same words over and over again and as he does so he thinks of me and me only.